Can I just tell you how much I LOVE home games?! I really like Reed, so it's really nice to have him around all the time. The games this weekend were so fun!

Friday night the Cougars won in 4! Should've won in 3, but hey, we'll take it. Reed had 2 kills, 46 assists, 3 digs, 5 blocks, and set the team to a .319 hitting percentage.
Saturday was so awesome. Once again, they should've taken it in 3, but settled with a 4 set win. But it was a record breaking night for the Cougs. They set a BYU all-time record of 24.5 blocks! Teammate Futi set a new BYU blocking record of 15 blocks! The blocking was crazy good! I get all excited just sitting here remembering the games! haha! Reed had 49 assits, 2 service aces, 8 blocks, and set the team to .377 hitting percentage. He's so good! Go to byucougars.com to see this weekend's highlight video.
And this little Cougar turned 8 months yesterday! He's such a trooper at the games-it's loud and past bedtime, but he does really well. He's a gym rat already! 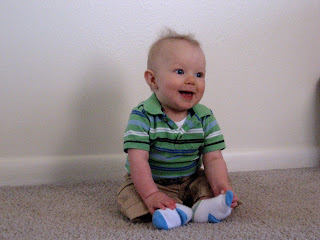 I just can't get enough of this little face! He also pulled himself up for the first time today!

that's a pretty cute cougar you have there...loved seeing your fam...thanks for coming!

I deleted my last post because I said something about Evan being 7 months old, yes I lost another month. I can't believe our little guy is 8 months old. Congrats to Reed--he was Reediculous! The Friday night match was fun to watch and we even watched the little ball bounce around the court Saturday night on the web--Reed was all over it!

Gosh Brittnie, he looks so much like you and your side of the family, but maybe he'll have his daddy's set and spike!