First of all, we'd just like to thank everyone that has remembered our little guy in your thoughts and prayers. We have definitely been able to feel of your support and love. It means so much to us.

The last 2 days have been much better. He already looks 10 times better than he did on Monday and is starting to move around a little more and make a little more noise. Who ever thought his little screams would sound so beautiful?! We've started to get test results back and they have discovered that the specific bacteria is Group B Strep. So even though I was given antibiotics for it during labor, he still picked up the GBS. But the GBS meningitis is the most common type and apparently it's the one to get if you get it at all. So we were happy to hear that. His bili has come down significantly, but they want it even lower since it is paired with the meningitis.

Evan was having problems with his blood pressure and his heart contractions. So he got another IV for those medications. But he's already off both of them. All of his vitals have been really good and have stayed stable. He's such a strong little boy!

Today we found out that his blood culture from yesterday came back negative-if his blood culture comes back negative again tomorrow the countdown to coming home begins! It will still be another 2-3 weeks, but at least we'll be on our way. We are so grateful that we are already getting those negative results back so soon. He had a brain ultrasound done today and everything came back normal.

Mom and Dad have been able to get a few good nights of sleep and we're eating better. Things are still pretty crazy, but we're making some really good progress. We were able to hold him a little bit yesterday and helped to give him a bath today. We love our little guy and just can't wait for him to be better! 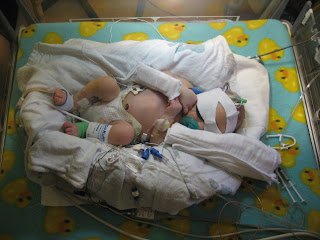 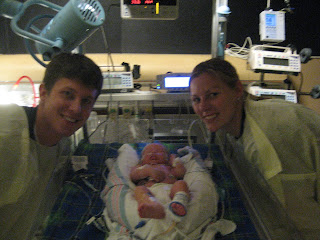 We're glad to hear the mostly good news :). We are constantly thinking of you guys!

Stella was very impressed with his crib and his bellybutton! Keep up the good work, Evan. We're always cheering for you.

Ohhh, look at him! Well, I'm so glad to hear he's doing better and that you guys caught it so early. I hope you continue to get good news and you'll have him home soon.

i am so glad to hear that he is doing better. i have pictures of bryn like that in the nicu. we are praying for you guys!

I don't know how you and Reed do it. We're so proud of all you guys, especially Evan. He's such a trooper!

yeah!! We are so glad to hear the news!! He looks so sad in that first picture.You guys are two strong parents and definitely one strong baby boy.
Can't wait to see more pics!

Oh good, we have been praying and thinking about you nonstop. He is such a cute little guy. That will be so great when you can take him home.Best Wishes. Let us know if you need anything.

You and your little guy have been in our thoughts and prayers. We're so glad he's getting better and better. He's absolutely beautiful, you guys did a great job. We hope you get more and more good news and I'm sure soon enough you'll be able to bring your little volleyball player home.

what a trooper. that must be hard for him. i'm glad you got some good news! could you guys use some meals or anything?

I am so relieved that he is doing better. I am praying for you and for Evan! I hope he gets to come home soon. You have been so strong! Keep doing the updates so we know when you get to bring the little sweetie home!
love, Megan