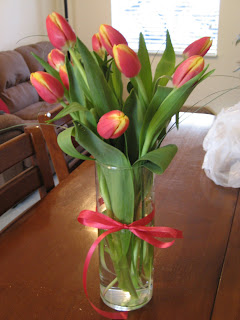 What a week! Reed left (after finishing his finals-woo hoo!) for California on Tuesday for the MPSF quarterfinals against CSUN. He was so awesome to leave tulips and a graduation shirt for me when I got home that night. My parents got in town on Wednesday for all the graduation fun. One problem...they bought a painting at the BYU Bookstore before they realized that it wouldn't really fit in their car for the drive back to California! But Dad is an excellent packer, and made it work.

Thursday was the big commencement ceremony (I'll post some pictures later when I get them). I was not so excited to go and did everything I could to get out of it. But nothing worked. It was cool to hear our speaker, Elder Bednar speak. I just wish I would've been able to stay awake for the whole thing! Thursday night we had Reed's mom, little sister, and older brother and his family all came over to watch the CSUN game on my computer (only available on the internet). We had a lot of fun together and the Cougs swept the Matadors to advance on to the MPSF Conference Championships! Way to go!
Friday was the smaller individual college ceremonies. I didn't care much for the strange musical number or depressing speech (she basically told us that just because we graduated that it doesn't mean we have an education), but they did say my name right! My parents had to leave Friday so Ryne and Trae wouldn't be at home alone for too long. It was great to have them out here and I'm thankful for the sacrifices they made to do so.
Saturday Reed's mom took us to breakfast at Kneaders-soooo good! I forgot how incredible that place is! Then we went to the dinosaur museum in Lehi. The kids loved looking at the dinosaur bones! Then we headed back for some lunch and for Marie to use up the rest of her meal plan before she left for the summer. So we pretty much have like 25 bottles of BYU chocolate milk in our fridge! That is good stuff! 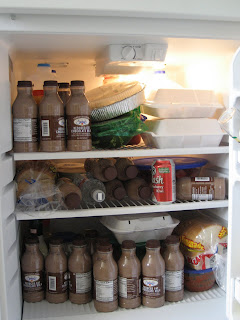 We ordered pizza, drank chocolate milk, and watched the championship game against Pepperdine on my computer. We won the first 2 games, but lost the last 3. BYU lost it's chance at an automatic bid to the Final Four, but was hoping for an at-large bid. Unfortunately, they were cheated out of that and LBSU got it. So that's it. Our volleyball season is over. We're bummed, but we're also excited to have some weekends again. Now we're just waiting to see when Reed gets to come home...hopefully soon! It's been a hard week to have him gone. But I'm so proud of how well he has done this season. He has worked very hard and has had to put up with a lot of stuff with the coaches, but has always kept a good attitude (he has certianly handled it much better than his crazy wife!). I love you Reed and hurry home!

I'm jealous of all the chocolate milk. :) Congrats on being done with volleyball! Enjoy your weekend together!

Congrats on graduating! Way to go! I actually miss being in school if you can believe it. Erick and I had the best time as students! What's next?
love, Megan

So, you still have to tell us when Doreen and/or Larry come into town. I would LOVE to see them again. Congrats on graduating and stuff. Now it is on to better things, I hope anyway. They did for me!!

We had a lot of fun with you guys. We hope we get to see you guys again soon. James and Ella say roar!