Saturday didn't have the happy ending that Friday night did. #9 Stanford swept the Cougars, giving the guys their first loss of the season. It was really weird-I didn't know what to do! Although it was a huge bummer, we knew it had to happen sometime and it's better now than a few weeks down the road. We were glad Reed got some playing time, but it was too late by the time he got put in. It was a really hard game to watch-the team just fell apart! Hopefully this was the kick in the butt they need and things will get better! They play Pacific this weekend at home! Go Cougs!

Here's what Reed did at last night's game...

What a crazy and wonderful week we've had! First, we had some fun volleyball moments...

After being the starting setter for the first 5 or 6 games, the coaches decided they might not want to travel Reed to the UC Irvine (they're ranked #6 and won the national championship last year) game this last weekend. Why you ask? If we only knew! After talking to them, we're not sure they even know why! We were told he was going, then he wasn't, then he was, then he wasn't again! We finally found out the night before that he was going, but I didn't believe it until he told me he was in California. This was a HUGE relief since my parents had bought me a plane ticket so that I could come too as an early bday present. So we both flew down on different flights to different places on Valentines Day! haha But Reed got me daffodils (my favorite!) and some chocolate before he left! 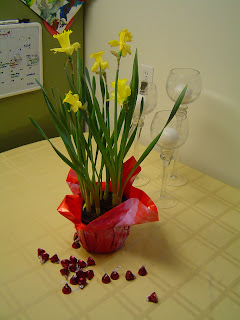 Friday night Reed got minimal playing time, which was actually a little more than we expected him to get (there were 2 other setters there this weekend). It was fun to have my parents, Johansson grandparents, and most of my siblings there to cheer him on. BYU won in 5 games-and what games they were! They won 28-26 in the fifth game!

Saturday was Reed's birthday-and it turned out to be a good one! BYU lost the first game and the second game was only showing a little improvement. So they put Reed in to finish the job! He played the rest of the night and the games weren't nearly as close as they had been the night before. He played so well and had some very impressive blocks! BYU took the match in 4 games to be the only remaining undefeated team in the conference. It was a birthday miracle! 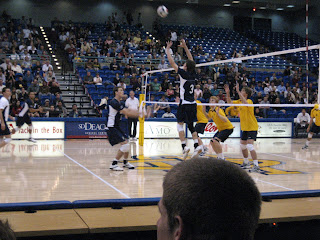 After the game we got to take Reed home with us for the rest of the weekend. He opened a few presents and then we had to have Mud Pie birthday cake! mmm!! We then got to enjoy Sunday relaxing with family at home before flying home seperately on Monday.

The other highlight of the weekend was that we got to meet our newest nephew, Reggie! What a cute baby! We had so much fun getting to hold him and he even got to come to Friday's match-and he slept through all 5 games! Pretty impressive Reg!

I Don't Know What to Title This One...

So much has happened since we lasted posted! We had another weekend of volleyball against #6 CSU Northridge. It was so much fun to have my friend Kareena come with me Friday night and Gillian on Saturday night. There were some pretty intense moments but the Cougs pulled through with 2 more wins. They weren't the best wins, but we're glad to hold on to the #1 spot. But even more exciting news is that there wasn't ANY volleyball this weekend! The team had a bye, so I had Reed all to myself! We had such a great weekend going to the temple, shopping, and spending time with some of Reed's mission buddies.

The highlight of the weekend was eating dinner at the temple (Reed has always wanted to try out the cafeteria). We got our food and went to give the cashier our debit card. She quickly told us cash or checks only at the temple. So Reed grabbed what he thought was enough, but we were short about a dollar. So we got an IOU from the temple! It was our first time going into to debt-and it was at the temple! Don't worry, we paid it off before we left, but it was pretty funny.

In other news, last week we put our contract up for sale and sold it within 20 hours! We're moving into Reed's cousin's basement (still in Provo) in the middle of March and we are so excited! So we've been looking at furniture and can't wait to redecorate!

And last week my college diploma came in the mail! Although it was a very exciting moment, it is now sitting in our file cabinet.