The last weekend in July was crazy. Saturday was Evan's birthday party, his cousin James' birthday, and the stake Pioneer Picnic. Ev's actual birthday was Sunday. Monday was my Mom's birthday and Tuesday was Uncle B's birthday. Tuesday evening we dropped off the kids at my parent's house for a couple days so Reed could play in a 6 man beach volleyball tourney. Picked up the kids Thursday evening and then Reed's parents flew in at midnight. Friday we went to Sea World. It was Reed's Mom's birthday on Saturday. Then they flew out Sunday. It was all really fun, but it was a lot! Reed and his Dad were planning on going on a ward ocean fishing trip early Saturday, but it was too much. So we've definitely been having a few recovery days here at our house.
Reed and I had a lot of fun at the volleyball tourney. Reed got to play volleyball with some of his buddies and I got to sit on the beach all day without having to chase a single kid out of the ocean! Reed played on a team made up of guys that either played at BYU or have some kind of connection to someone who did. It was fun to see some of those guys again! The team had a corporate sponsor, so we didn't have to pay for our hotel or any of our meals! It was pretty nice.
Unfortunately, there were like 20 something guys on the team. The first day was pool play and everyone pretty much got equal playing time. So yeah, Reed split time with 3 other setters. Kind of lame. But it was really cool because they had some current and past pro beach and indoor players on the team, including 2 time Olympian Jake Gibb! It was pretty cool. Gibb and his current beach partner, Casey Patterson (who was also on the team), are currently ranked in the top 3 in the world!
Reed setting 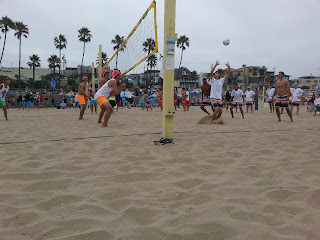 The guy in the white hat is Phil Dalhausser, aka The Beijing Beast! We also saw Sean "Rosie" Rosenthal (who was actually in disguise the whole time) and former USC quarterback Matt Leinart (who knew he played beach volleyball on the side?!) 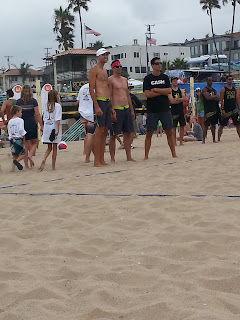 Reed saying hi to Jake Gibb (in the black) 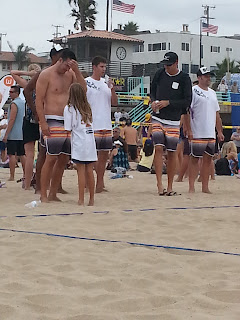 The second day was elimination day. The team had a few amazing comebacks to stay in the tourney, but ended up taking 7th. Pretty disappointing, but that just goes to show how much competition was there. They pretty much played the same 10 guys that whole day, excluding Reed. Super lame. They probably would have had a better finish if they would have let him play. Oh well. 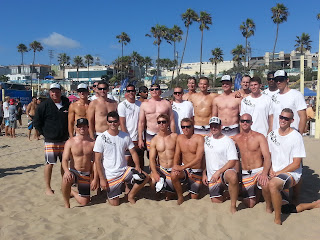 Posted by Brittnie at 3:49 PM 3 comments

A couple weeks ago our space loving boy turned the big FOUR! He's been pretty excited for his birthday and for his space birthday party! Since there apparently aren't very many space loving kids left, we had to do most of the party stuff ourselves. But it was fun to work on the decorations and invitations and stuff together. Evan loves helping Mom use the Cricut!
We had hung up the solar system above the table Friday night after Evan went to bed. When he came out Saturday morning, he took a few minutes to look at it and then told me that Uranus was too close...! 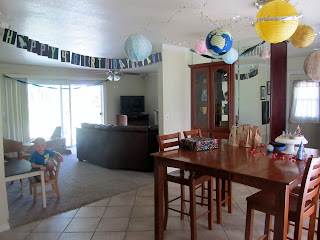 We just invited all the kids in his Sunbeam class. Everyone made us pretty nervous, but all the boys ended up coming! I was so glad and so relieved! And it turned out to be a pretty fun party! First we started off with 'Pin the Rocket Boosters on the Spaceship'. I think Evan was the only one who played the first time around, unless of course you count Ryder's mom! 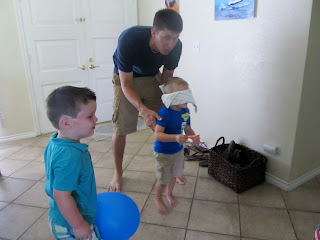 Then we headed out back to have 'Rocket Races'. I found these cool little rocket balloons at Michael's and the kids loved them way more than I thought they would! 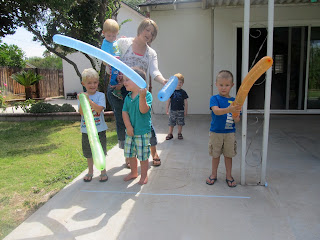 Then we drew a big circle on the patio with chalk to make a moon and the boys took turns throwing water balloons at it to make 'craters'. They loved it and I should have known to make more water balloons!
Next we headed back inside to open presents and then have cake and ice cream. 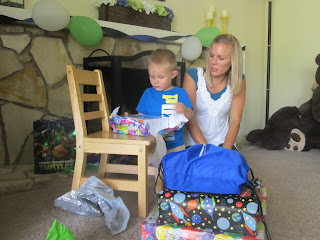 Here's the awesome 4-year-old with his moon cake 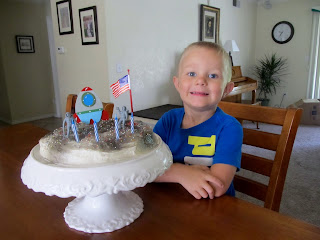 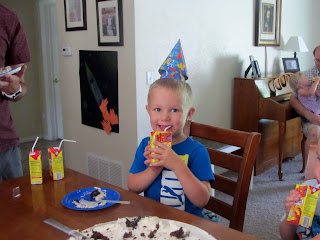 I love these little friends! 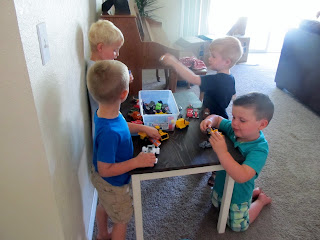 He's already excited about turning 5...
Happy Birthday Ev! We sure love you a lot!

Posted by Brittnie at 3:25 PM 3 comments