About a month ago, Reed and Evan discovered a kids youtube video about the solar system. Evan really liked it and was interested in the planets and the sun. So for the next few days, me and Ev started learning about the planets during Audrey's naps. It was so fun to see him learn and ask questions and remember certain facts about each planet. I love that he brings up that Pluto used to be a planet, but it's not anymore! We learned a few things about each planet and drew them close to scale. He got to practice his writing by writing the name of each planet, he got to practice cutting out the planets, and he got to color them in. So it was an overall really good little project. Here's our solar system we made together. 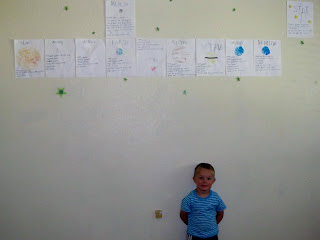 I love that every time we see the moon we have to specify that it's earth moon. The other day I told Evan that my parents were in the mountains. He asked if they were on Mars' mountains since they are the tallest!
Our solar system didn't quite satisfy his love of space. For the last probably 2 weeks, he gets up every morning to work on his own solar system. He did all the planets and is now working on the moons. I hope he doesn't plan on doing every single moon because there are over 100 of them! But he's well on his way! Here's what his wall looks like now (and he just handed me another one of Saturn's moon to hang up)

We'll see how long it takes for him to finish covering up that wall! Now, off to the space shuttle to play astronauts!

you are such a great mom, but I still feel bad about pluto! The wall looks great--he is some kid!

wow...he is a great kid! Just a warning though, I had a boy just like that and his now a real rocket scientist and works at space stuff for money! Love it!

That is awesome! I am amazed at Evans memory! Hes a genius! Good job Brittnie!