A couple months ago Ev and I were doing our normal grocery shopping. We were walking down the isle that had the pickles and they smelt so incredibly good! But we kept walking. The same thing the next week. The next week I finally gave in and bought a jar of pickles. And you better believe that me and Evan (but mostly me) polished off those pickles in just a few days.
A couple weeks later Reed and I celebrated our 4th anniversary. Being the sweet husband he is, he got me some beautiful flowers and a pack of chocolate pudding for every year we have been married. And I couldn't have asked for anything else that day. 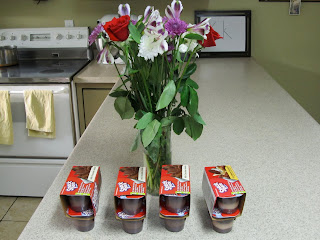 Yep, you guessed it...Baby #2 is on the way!!!! Evan is due to become a big brother around January 11. We're really excited for this new addition, especially if this baby is half as wonderful as Evan! 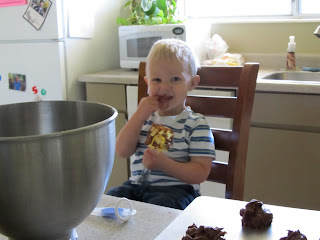 And yes...there is another jar of pickles in my fridge right now.

Evan is soooo cute and the stuff on the spatula looks why better than the pickles in the fridge! So excited that number two is on the way! Feel better!

THAT IS THE BEST NEWS OF MY WEEK!!! CONGRATS TO YOU!!!

So excited for you guys! Hope Evan likes being a big brother! ;)

Congrats!! That is so exciting!!

YAY!!! I am so excited for you! We can't wait to see some pictures of this little person! Evan will be a great big brother! By the way, the pickles may be part of your nausea problem...

I ate pickles with Reggie. So excited for you all! Congrats!

OH that is great news! I love the pickle story! I knew I was pregnant with Lily when I didn't want salad and I did want chewy lifesavers... congratulations!