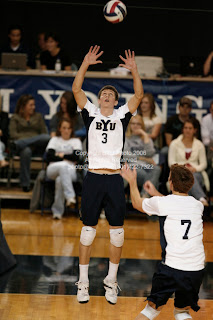 This has been an exciting week for us-we started off the week with Reed getting strep throat. Lots of yogurt and big pills! But he's doing much better now.
Saturday the Men's Volleyball team played the University of Puerto Rico. Reed got to do some setting in the scrimmage and then had his middle blocker debut in the game later that night! BYU won the scrimmage in 5 and the game in 3. Other than a jammed finger, they were good, safe games. Their next game is Tuesday night when they play an alumni team.
We also got a lot more snow! Most of last weekend's snow melted this last week, but then it snowed a lot again yesterday. The Puerto Ricans took lots of pictures of it and had a great snowball fight!

Too bad about strep throat, glad its gone now! How fun that Reed had his debut. I will have to come to a game with you sometime....then we can catch up and such.

Hey Brittani! Tell Reed good job! BYU is doing pretty well this year in sports. Also...bummer about the snow. I am not looking forward to that when we head up htere for Christmas. We have tons of ICE here...we don't really get snow...we get ice!

Hi cousins! I've successfully found another blogging friend and I wanted to wish you guys a Merry Christmas.

Hi Brittani,
That is a great picture of cute hubby! So happy to see him playing again.
Looking forward to having you guys over when you come!