Last night we gave Evan a haircut. But this time we decided to try using the clippers since the last haircut with scissors did not turn out as well as we had hoped. Oops. We were pretty nervous about how he'd react to the clippers. But our good friend, Amanda, gave us a tip from her mom to tell Evan that the clippers just tickle. Worked like a charm! 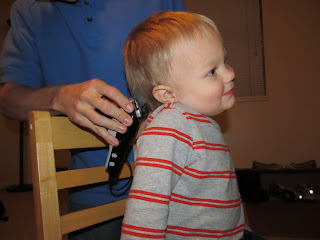 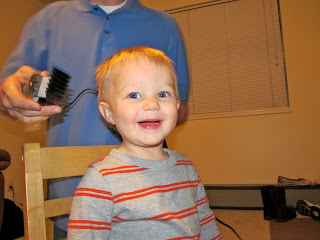 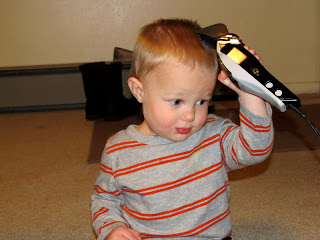 PS-Reed just finished defending his thesis...and he passed! A few minor changes and he will be free of that thesis by March 18! We're so proud of him!

Evan is getting so big and is so adorable. I love your cute blog and reading up on your fun little family.

Lookin sharp! Do you remember when we bought the clippers and how trae looked like a homeless child for a month?!! Good times!

Yay for Evan and Double yay for Reed!