As we approach Evan's very first birthday (!!!!), he has been doing a lot of new stuff lately. We took him in for his 1 year old appointment and here are his stats: 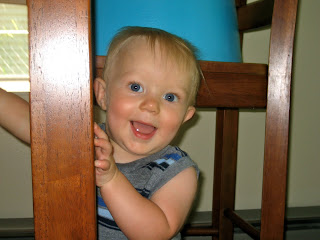 Weight: 20 lbs, 5 oz (he got sick last week, so he lost a little), 25%
Height: 29 inches, 25%
Head Circumference: 46 cm, 25%
So we're still waiting for some huge growth spurt, but at least he's well proportioned!
We got the ok to start Evan on cow's milk and to turn around his car seat! The Dr recommended giving Evan ice cream to help him get his daily dairy (Dad has a new love for this Dr now!). So to celebrate, we turned Evan's carseat around and went to get ice cream! He loves it! 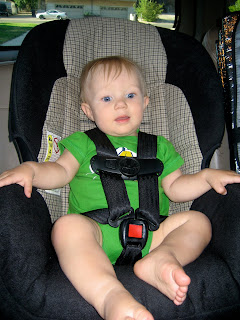 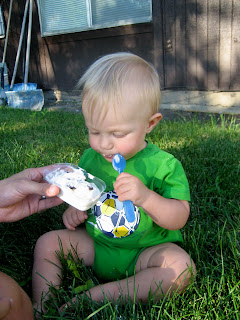 We also decided it was time to give this boy's hair a trim. We had to do it in a few stages.
Stage 1: in the backyard while he played with the grass. 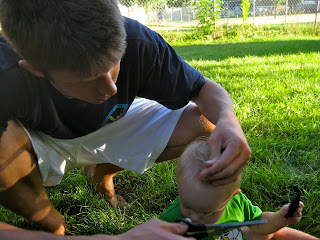 Stage 2: In front of the TV. Yes, he is watching a Spanish soap opera. It's the only channel our antenna picks up. 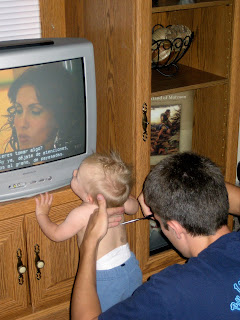 We went to the pool again yesterday. Evan had a lot of fun in the water. And when he wasn't in the water, he was lounging by the pool! 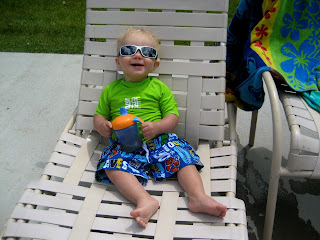 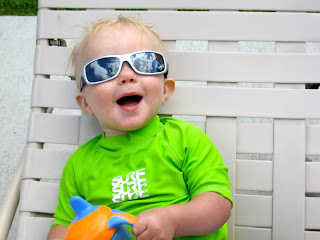 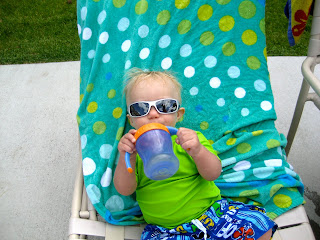 Oh I think Mark would love that doctor too. He likes to tempt Julia with ice cream all the time. I love the Spanish soap opera:)

Just when I think he can't get any cuter! Love the pool pictures--he is one cool dude!

he may be low on the percentiles now, but I have a feeling that he's going to sprout off the charts one day.

The poolside pictures are my favorite- what a hunk!