The Cougars traveled to UCLA this past weekend to take on the Bruins. Back at home we had to settle for an audio only broadcast and "live" stats online. I wish we would've been able to watch this one because it was intense! BYU dropped the first set 38-40! It was a long, hard one to lose, especially after having 6 set points. Dang. Unfortunately they lost the next 2 games to give UCLA the sweep. One highlight was Reed's ace!


Thanks to members of the Wives Club for coming over to watch stats pop up and keep me company! Love you guys! 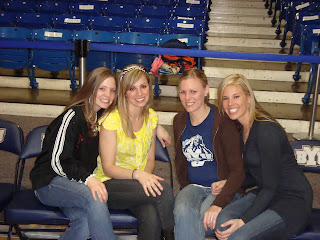 This picture was taken after a game last year when I was just starting to show with Evan...can you tell?! lol

WE are sooo excited to have you here in person this weekend. Lots of food, lots of volleyball and lots of Evan--FANTASTIC!