It's been a long week for us-we both stayed home sick Wednesday and are still working to get back to 100%. All week we looked forward to have Reed's brother, Jay, and his cute family here for the weekend until the kids got sick and weren't able to come. We were pretty bummed, but were glad to still have his parents here.
This weekend the volleyball team hosted UC Santa Barbara. Friday was a little crazy. Reed got to start, but due to some bad serves and bad defensive plays, the Cougs were down and he got subbed out. They lost the 1st game, won the 2nd, and lost the 3rd game. So they put Reed back in and they won the 4th and 5th game. 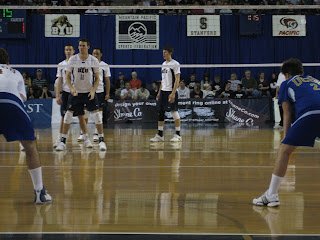 Saturday night was awesome! Reed started again and led the team to a 3-game sweep! They played so well. Fortunately, Long Beach State lost two games this weekend, so if they lose one more game and CS Northridge loses one more game (and BYU doesn't lose anymore), BYU will host the conference championship and Reed will be able to come to my graduation! woo hoo! The two teams play each other the last game of the season, so if whoever wins that game could lose to someone else first, that would be fantastic! The team is now getting ready to head out to Hawaii on Tuesday-and I wasn't invited.

Posted by Brittnie at 7:08 PM 5 comments

We hope everyone had a great Easter. Ours was wonderful! We filled baskets for each other and then had Marie over for a yummy ham dinner with fresh strawberry shortcake after church!
Here we are dying our eggs Saturday after a wonderful picnic in the park! 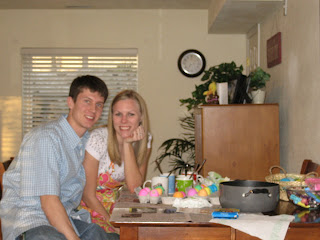 Here's a quick volleyball update:
2 weeks ago BYU played UCLA and Reed played pretty much the whole weekend. Thursday night they pretty easily swept the Bruins (a nice bday present from an out-of-town husband!) and then lost to them in 4 on Friday night.
Last week it was back to California to play Long Beach State, who we were tied with for first place in the conference. Unfortunately, it was a pretty ugly weekend. Swept on Thursday and lost a heart breaker in 4 on Friday. Reed played the 3 (the only game the Cougs won the whole weekend) and 4 games Friday night and did so well.

Posted by Brittnie at 7:26 PM 2 comments

So I got in trouble for not having a new post up yet (sorry Kareena!), so here it is!
Although we had a VERY busy weekend, we had a lot of fun. I started a new job on Thursday as a receptionist at Grandview Family Medicine Clinic in Provo and think it's going to be a good one (always a good sign when you hear people yell, "Tell the patient that their urine is very normal!")
Then of course on Friday we had home volleyball games. The #2 Cougars took on the #5 Waves of Pepperdine. Things started off really well, mostly thanks to Pepp's 9 missed serves in game 1. Then a few plays into the 4th game, Brian, the starting setter, rolled his ankle. We were bummed he got hurt, especially since he was playing so well, but were also very excited because Reed got to play! And he played wonderfully! BYU took the match in 4.
Saturday was our big move day and we got our brand new microfiber couch! It was all very exciting. We are loving the new place and will love it even more when we are totally unpacked and the old apt is clean!
Saturday night Reed started in the match against Pepperdine. He played awesome once again and the Cougs were able to sweep the Waves! It's usually the other way around, so it was a big win. And it was the best the team has played all year. They were so fun to watch and it was good to finally see some leadership and heart on the court.
The other highlight of the weekend was having Reed's parents in town. We always love having them around and we REALLY appreciated having the extra help on Saturday. And they took us to lunch at PF Changs-mmmm!

Posted by Brittnie at 9:41 PM 6 comments